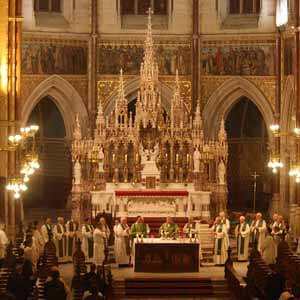 Q :
In the Summa Theologiae, Tertia Pars, Question 83, Article 5, Objection 3; Aquinas ascribes the sign of the cross to events of the Passion when the priest says certain lines in the Roman Canon. These actions are now omitted, even though the text is unchanged. What changed and can the actions return?
【 Question from 】 Toronto, Canada
Fr. Francis :

Before I answer the actual question, you should know that it is still possible today to attend the Tridentine Mass in many places, which preserves the gestures in question.

In Summa Theologiae III.83, Thomas Aquinas discussed various aspects of the mass. He clearly stated that the form of the gestures was “prescribed” or “ordained” by the Church, whose authority to do so was stated in an earlier question. Thus when Aquinas mentioned that the signing of the crosses is meant to correspond To the events of Christ’s passion, this is meant to be “descriptive” of the ordained gestures and not “prescriptive” i.e., these gestures add to the Mass but do not define the Mass. This is evident in how he argued for the other gestures, like washing of hands, or adding a corner of the host into the chalice, or how the host is to be fractured.

In other words, the Church has the authority to determine certain gestures for the liturgy when it is reasonable, and so it also has the authority to change them when new reasons can be found. That the many crosses the priest had to make during the Eucharistic Prayer in commemoration of Christ’s passion is beautiful, but it does not mean the removal of them alters the substance of the mass.

Historically, the multiplication of gestures happened gradually after the 9th century, and the reasoning came afterwards. In fact, at one point, the gestures was so prolific that the priest seemed to be doing three separate liturgies simultaneously: he recites the text which speaks one thing, the unending list of gestures which had a life of its own, and the multiple layers of explanation for the gestures that often had nothing to do with the text or the liturgical actions being performed at the time. At the end, the Church had to scale it back before Aquinas’ time. So Vatican II is not the first time the Church changed this aspect of the liturgy.

As to what needs to happen for the Church to take up these gestures again, the Church has full authority to do so, but it is the wrong question. The question rather is if the Church would find it reasonable or necessary to adopt those gestures again. Part of the many reasons Vatican II decided to remove these gestures was she wants to make the Mass more accessible to the people, and to restore the Roman principles of simplicity, elegance, and solemnity. And thus we now have the Novus Ordo of the Mass. The Mass needs to have its mystical elements, but at the same time the gestures need to be able to speak to the people, so to draw them into full and active participants in celebrating the Mass together.