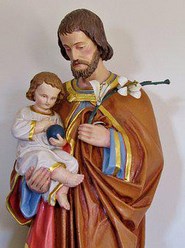 Q :
I am referring to John the Baptist being cleansed of his Original Sin when Jesus visited him at the time of Visitation by Mother Mary. I never had doubted that anyone other than Mother Mary is the only one Immaculate Conception. With this clarification, I wish to ask again for your kind guidance why Mother Church did not declare St Joseph the same – Original Sin being forgiven before Christ’s death?
【 Question from 】 Canada 加拿大
Fr. Francis :

Ok, I understood your original question:

1) you claimed that John the Baptist had original sin wiped away when Mary visited Elizabeth,

2) Hence why there was no declaration on St. Joseph about his original sin being wiped away some time during his lifetime with Jesus?

So, I only answered that the first part is unfounded, hence no need to answer the second part.

I added that comment that John the Baptist would never be declared conceived without sin as Mary, not because I thought you were asking for that, but merely to summarize the article I quoted you.

And no, there has been no official teaching regarding St. Joseph’s original sin being wiped by Jesus during his lifetime.

As to why, that is impossible to answer. He is for sure in heaven now, why does it matter? And unless there is some definite revelation, preferably since the beginning of the Church, or some grave needs like heresies, the Church is not in the practice of arbitrarily adding doctrines, even those that are very reasonable.