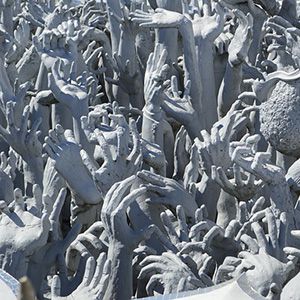 Q :
Do ghosts and demons exist? If so, can demons hurt us and how can we protect ourselves from demons?
【 Question from 】 Canada 加拿大
Fr. Francis :

Ghosts and demons do exist, but perhaps not as the world thinks they are.

Ghosts, supposedly, are the souls of the dead. The Church does not say much about them as such though, and for good reasons, since the souls of the saints are in heaven, and would only come to visit us when they are sent by God on a mission. The souls of those in purgatory are too busy getting purified, and it seems that the only time they come to us were to certain holy persons so that the truth of purgatory may be made known to us. And the souls in hell, well, they are too busy being tortured. Some scholars theorize that the only souls that would fit in the typical understanding of ghosts would have to be those in hell, since the other ones would be messengers from God, not just some wandering ghosts. But if they do exist, they are not capable of harming us; unless somehow we see them and allow ourselves to be afraid.

But I personally suspect that what most people claim to be ghosts are really demons disguised as ghosts to harass us.

As to demons, they are the fallen angels, the minions of Satan. These have real spiritual powers and could cause real harm. However, we do not need to be afraid of them.

First, because they are creatures and so their powers are nothing compared to God’s. And as such, they have already been defeated by Christ. As long as we remember that we are God’s children, they cannot harm us and we have nothing to be afraid of. In fact, we can even cast them out in the name of Jesus, if we believe with confidence.

It is only when we let them in, either out of disbelief in their existence or out of fear. This could happen, for example, when we think the occult such as ouija board or tarot cards or black magic are nothing but just some harmless fun, we are in fact inviting the demons into our life. Or instead of trusting in God, we are fearful of any and all of their harassment, imagining that we cannot be helped by God, then already we have allowed ourselves to be dominated by their powers. When these happen, depending on the seriousness, we may be freed by simply renouncing them and confessing our sins, to needing help with deliverance, or worse, requiring exorcism.

But again, there is nothing to be afraid of. We just need to remember. They exist. They are defeated. They have no power before Christ. We just have to stay with Jesus, firm in the knowledge that we belong to Christ’s victory.