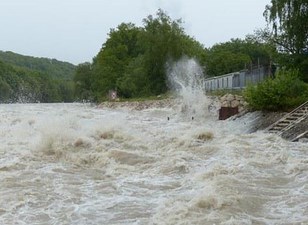 Q :
Has God abandoned us in these difficult times of war , flood, pandemics etc? He promised Noah that He will not send floods again. Is this another version of God & Job??
【 Question from 】 Australia 澳洲
Fr. Francis :

Of course not. God does not abandon us. He is not capable of abandoning His children. He loved us so much He sent us His only Son to live, die and rise again for us, and He continues to be with us today in the Church and in the Sacraments, especially the Eucharist. Jesus is in us. If we suffer, He suffers with and in us.

God also did not say He would not allow other means to destroy us, especially if humanity persists in sin. In fact, many times in both the Old and especially the New Testament, prophets and apostles and Jesus Himself prophesized that the world will be destroyed by fire on the last day.

But why are there floods, wars, and sufferings? For the most part, it was due to sin. God entrusted the whole creation to mankind. We are called to be collaborators with God so to rightly love one another and govern creation. But when we sinned, we lost the grace of God and we lost the authority over creation. As sin increased in the world, nature rebelled, and atrocities among ourselves increased.

God is not to be blamed. He our Father is very sad to see His children rejecting truth and love so to hurt ourselves grievously and needlessly. He permits us to get hurt because He has given us freedom, and He hoped that our suffering will bring us to our senses to repent and to live rightly again.

This is the message of Jesus. God is here to save us, sin is to kill us. Repent and choose life.

Mary too, in her many apparitions, especially in Fatima, reaffirm this gospel truth that the weight of sin in the world is too great. If we do not repent and make reparation for sinners, we will be annihilated. Yet it is within our power to turn the tide, by joining with Mary to pray for conversion and to be holy ourselves.

Think about it. Can we really not expect calamities when we as a race systematically deny the personhood of the unborn and murder millions of innocent babies year after year? Can we really expect creation not be in rebellion when we selfishly abuse natural resources? Can we really expect no consequences when the God whom all other living things worship is regularly offended by our outrages, sacrilege and indifference, especially by us call ourselves His followers, especially when we so often flagrantly receive the Eucharist ill-prepared and irreverently? God is merciful, yet He can’t stop us who wilfully take the dagger of sin and plunge it into our own heart.

As a family we have sinned much. And so as one choosing to console Jesus who is sad for us, let us seek to repent and make reparation for the sins of humanity. Let’s rebuild the culture of faith and love, beginning with our neighbours.