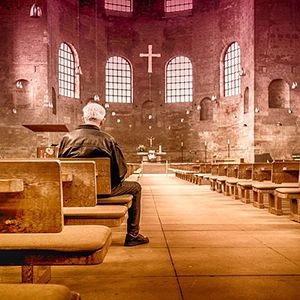 Q :
Is Christianity a made-up religion by people who want to change the society and risked their lives doing this? Can it be fake? I know there are historical evidence of Jesus from historians but can they lie too? Can the apostles lie? Can the miracles and contents of the Bible be fake? I really do want to believe because I know that a lot of good things can happen to me and the service I can provide for God but I really have a lot of doubts. Please help Fr. Francis!
【 Question from 】 Canada 加拿大
Fr. Francis :

If you refer to the historical stuff, I suppose you have already read up on some of them. Let me just say, given the sheer magnitude of the physical evidence available, the authenticity of the bible and of the person of Jesus is really historically beyond reproach. If the bible can be fake, no other historical books can be believed. And if Jesus lied about who He is, as I said elsewhere, He can only be a lunatic or an evil deceiver of the worst kind. But no one in their right mind would ever say that. The evidence is firmly against those possibilities. They would call Him a good teacher, but He did not allow that option. He claimed that He was equal to God.

As to the miracles and the authenticity of the Church, I invite you to study them. The majority of them, especially of the more recent centuries, have solid medical and scientific studies behind them. And these are often conducted not by believers, but atheists. In fact, Vatican insists on it. The sheer quantity and the magnitude of these miracles are staggering. No one can read them and not at least start wondering that some higher mind is orchestrating things in the world.

And then there are the miraculous conversions of so many, some of the most unlikely persons. From the conversion of St. Paul and St. Augustine, to the conversion of Alessandro (who murdered St. Maria Goretti) and the daughter of Joseph Stalin, and many many others.

But at the end, I think you need to ask God: “If you are real, show up!” I promise, if you pray that every day, and keep an open heart, He will show up.