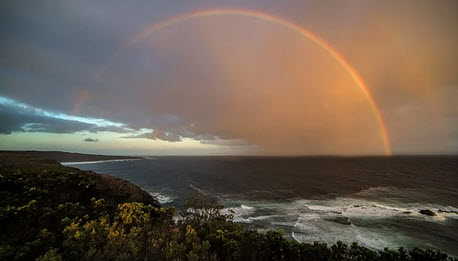 Q :
In Genesis 9:16, “Whenever the rainbow appears in the clouds, I will see it and remember the everlasting covenant between God and all living creatures of every kind on the earth.” God made a covenant with Noah never to destroy life by the waters of a flood. I personally saw a rainbow on Oct 24. And a double rainbow appeared in the sky of Vancouver on Nov 5 which a lot of people saw and captured on camera. But yet BC had an extreme flooding on Monday. Is God mad at us?
【 Question from 】 Canada 加拿大
Fr. Francis :

I think there are two parts to your question: whether God promised not to destroy life by floods, and whether the recent floods in BC means that God is angry with us.

Notice that as early as Isaiah’s time in the Old Testament, God has already revealed that heaven and earth will be destroyed and be remade at the end, and in the New Testament it was revealed that this final destruction will not be by floods but by fire.

Of course, one must not be too literal and narrow in interpreting what this “fire” means. It may include the various natural phenomena connected to fire, like volcanic activities or even nuclear holocaust, but it could also mean a spiritual fire as to a period of intense purification and persecution.

As to whether the floods in BC indicate that God is angry with us, that’s more complex.

First of all, God’s anger is unlike ours. Our anger always comes with mixed motives: it can be partially out of retaliation and partially out of love and righteousness. GOd’s anger, however terrible it is, is always out of love to correct us and to warn us from further evil. God simply does not have any partiality in Him, and He is love.

The weight of sin indeed does damage to creation. It is an actual burden on the fabric of the reality we live in. Whenever we see nature rebels, it is always pointing back to how the summation of our disobedience has abused the creation God has entrusted to us and our failure to love one another. These are the “signs of the time” that Jesus talked about. This is nature calling us to repent. If this is called God’s anger, then it is certainly not anger to merely punish us to cause pain, but rather His plea for us to turn back to Him