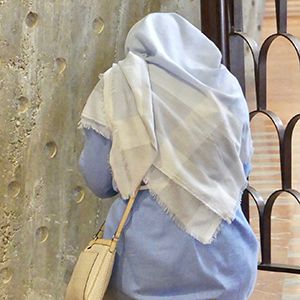 Q :
Some ladies wear a veil to mass but most don’t. Some wear black and some wear white. What is the meaning of the veil?
【 Question from 】 Canada 加拿大
Fr. Francis :

This is from 1 Cor 11, where St. Paul talks about how a man must not cover his head but a woman must, because man is from God but woman is from man. (I did not make this up. Read the chapter.)

While I believe Paul is here speaking out of his own cultural bias, and I’m strongly leaning on St. Paul having his theology mistaken here, I dare not say the scripture here fails. So let me explain a few things here.

The practice of women veiling their hair dated before this letter. The reason is that women of that time would richly decorate their hair to draw attention. This practice was referred to in 1 Peter as well as by writers of the time. Women who covered their hair therefore were signifying to others that they had given up their beauty for piety.

For many centuries, Europe has adopted this practice. Women would put on veils before entering a church so as not to draw attention to themselves.

However, with the massive expansion of christendom into the rest of the world started in the 16th century, they quickly discovered that this is more a cultural statement than an absolute truth. In some cultures, covering the head is simply not practical or even acceptable. It has nothing to do with being pious or vain.

In recent years, there has been a return to the more traditional way of celebrating and participating at the Mass, especially among the young people. This habit, among others, was viewed as part of the lost culture to be revived. I have no objection to that. I think that the mere fact that they are going through all the troubles to take on this new habit for the sake of piety and respecting the liturgy, I sincerely pay them high honour. It is a sign of their love and must not be criticized. However, I do not support the idea that everybody should do it. There is nothing wrong with a woman coming into the church without a veil on, unless of course her hairstyle or decoration is distracting and ostentatiously showy. In that case, putting on a veil would not help. They don’t need a veil, they need a change of heart.