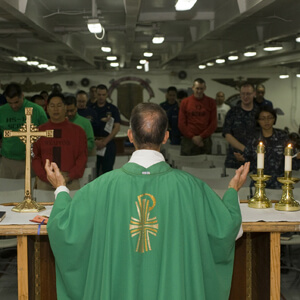 Q :
Is it a sin against the first and fourth commandments for giving a priest equality with God my Father and my earthly father whom I am to honour?
【 Question from 】 Canada 加拿大
Fr. Francis :

The title “Father” for Catholic priests

This title goes back to apostolic times. In the letters of St. Paul to Timothy and to the Galatians, he referred to himself as being a “father” to them. Since the earliest time, the bishop, being the successors of the apostles, were called “father” since they father their congregations by their pastoral labours and personal care. It is also from this that we call the Bishop of Rome “Papa”, translated to “Pope”.

Calling our priests “father” is not idolatry,, but a title that also bestows on them their function and duty as our spiritual fathers.

Some Protestants are vehemently against this title because of Jesus’ teaching “to call no one on earth ‘father'”. However, that passage in its context is obviously a hyperbole, an exaggerated rhetorical device used to target those who use their titles to puff up their honour and neglect their duty. This is not what the title “father” means for the priests. And it is obvious that Jesus was not asking us not to call our earthly fathers “Father”!