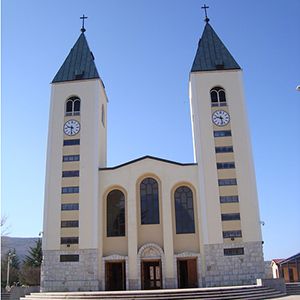 Q :
What is your personal view on Medjugorje?
【 Question from 】 Canada 加拿大
Fr. Francis :

I have been to Medjugorje five times as of today. I plan to return again. It is a very special place. Apparitions aside, I have not been to a place where there is so much peace, so much desire for prayer, and so many fruits of conversion, as evidenced by the sheer number of people attending Adoration every day and the astounding number of Confessions. Someone once said it is the closest place to heaven on earth. I attest to this statement.

I have also been following the messages. I can’t say I am an expert, but I have not read anything there that is remotely controversial. If anything, they correspond to the Scriptures and many other approved Marian messages, like those of Lourdes, Fatima, Rwanda, Akita, Betania, etc. They are consistent, simple, and very motherly.

Although Vatican has not approved this ongoing alleged apparition, neither has it condemned it. In fact, it has more than once mentioned that while the Church officially cannot promote pilgrimage to Medjugorje, believers are free to go, and lay people are permitted to organize pilgrimages; and for that reason, clergy must attend to their spiritual needs there, meaning priests are free to go there on their own or accompany these groups. If this apparition has had raised any suspicion, the Church would have long time ago condemned it, or barred pilgrimage activities, or at least asked the local Franciscans not to encourage the increase of pilgrimage activities there. Vatican not only did not do that, but when the local bishop tried to, Vatican took the right out of his hands so the Church can better investigate the alleged apparition. This has never happened in the history of the Church.

To me, this is saying that the Church seriously believes something very valuable has been given to us in Medjugorje. While we cannot yet give official statement about its nature, let’s not harm it prematurely.

And in fact, after the latest investigation has concluded a couple of years ago, Pope Francis has appointed a special legate who is currently in Medjugorje assessing its pastoral needs. He is the highest ranking official ever sent to station at Medjugorje. And although he does not reflect the Pope’s opinion, he has given many positive encouragement ever since his arrival a few months ago. It is his report that Pope Francis will base his decision on regarding the pastoral needs of Medjugorje as well as the shrine status of the place.