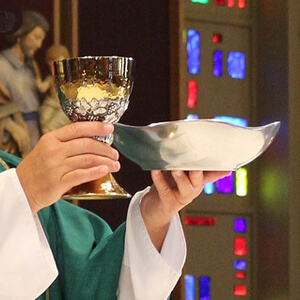 Q :
When did the theology of host contains both Body and Blood initiated in Catholic Church? (year, council and the pope who declared it.) Jesus said, "This is my Body and this is my Blood and drink and eat and whoever receives will attain eternal life." Why did Jesus not say you eat my body because it contains everything body and blood? And why do we need wine in holy mass as per the new theology if the host contains both body and blood? Jesus teaching and new theology is mismatching.
【 Question from 】 Other 其他
Fr. Francis :

Although I don’t have at this moment the exact earliest instance the Church started teaching that both species (host and chalice) each contains the fullness of Jesus Christ’s glorified body, blood, soul and divinity, I can tell you that St. Thomas Aquinas (13th century) has already affirmed it in his Summa Theologiae, 3rd part question 76. And the last time the Church declared the same teaching in a council was at the Council of Trent. So I can assure you that this is not a new teaching.

And since Jesus is fully man and fully God, His full Body, Blood, Soul and Divinity is present in each particle of host and each drop of the chalice.

When Jesus said “This is my body, take and eat” and “This is my blood”, we have to remember that He was instituting a sacrament, and not explaining theology in exclusive terms. He was just simply stating the symbolism of bread and wine now points to His real presence, with the language of sacrament and devotion necessarily needs to be succinct and simple. If Jesus were to explain the intricacies of transubstantiation, then His disciples would have never understood the message.

And if bread becomes only Body and chalice only Blood, then neither is Jesus, since just the Body or just the Blood is dead. But what we receive, even in one species or in the smallest quantity is the living, glorified Jesus in entirety, which necessarily consists of His Body, Blood, Soul and Divinity.

People in the early Church always received both species. To this day, in the Eastern rites and the Orthodox Church, the Bread is immersed in the wine and the whole cup of bread and wine are consecrated together. The faithful would then receive both from the priest through a special spoon.

In the Western Church, since its custom was to separate the symbolism into hosts and chalice since the beginning, when the administering of the chalice became increasingly difficult and was withheld from the faithful, the reception of only the host became the general practice for many centuries. But during the liturgical reforms of the early 20th century, culminating at the 2nd Vatican Council, the desire of the Council Fathers was to once again reintroduce the chalice so that the full symbolism of bread and wine may be once again reconnected to our belief in the Eucharist being the Real Presence. In other words, the chalice was brought back not because there is anything lacking in the Eucharist in the host — each host is the whole Jesus, but that we can have the full benefit of the symbolism of bread and wine both being the Body and Blood and Christ.

Having said that, Vatican II also clearly said that the chalice should be given at special occasions with proper catechesis. It was not originally meant to be made available at every mass, since there remains certain practical difficulties when it is offered daily that may not lead to due reverence without proper preparation, like too much left over, purification of the vessels, spillage, sacramental abuse and sanitary concerns.