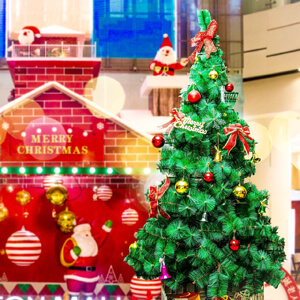 Q :
How does Christmas tree related to Christmas? Are there any symbolism of decorating the Christmas trees? During Christmas, people usually decorate with wreaths hung on doors or windows. How does it relate to the birth of Christ? Why do people use holly with berries for decoration in Christmas?
【 Question from 】 Canada 加拿大
Fr. Francis :

Instead of giving a straight answer, I will point you to where to start your own research:

Christmas tree: you need to read up the story of St. Boniface since it started from him. Apparently, Germany at the time was not converted yet, and their pagan religion used trees for worship. So St. Boniface cut down their pagan poles, but miraculously evergreen trees began to grow from the cut tree stumps, which is a symbol of Christ. This also reminded people that Christ died on a tree to redeem us. So later on, when evergreen tree became a symbol of Christianity, people started decorating it with symbols reminding us of Christ birth, death and resurrection.
Look up the tradition of Jesse Tree for more information.

Regarding Advent wreath, that was adopted from secular practices in Northern Europe. Some would argue that it is not exactly a Christian symbol and should not be adopted in liturgies. You can easily find endless debates on this on the internet.

The wreath was a symbol decoration around the table candles. In northern Europe, as the day of Christmas approach, it gets dark earlier and so more candles were lit by dinner time. Hence the progression from one candle in the first week to four in the days before Christmas. When Advent was thought to be “another Lent”, mistakenly, people changed the colours to purple and rose to mimic the colours of Lent. Somehow people found it a nice and warm symbol and adopted it into the liturgy. When Advent was reintroduced as a season not of penitence but of hope, new meaning was assigned to the purple colour as “expectation” and not as sorrow. There, you have your Advent wreath.

With regard to the other symbols, many are secular, but some have been adopted for a long time, like bells. Again, I will have to leave you to find the answers on the internet.