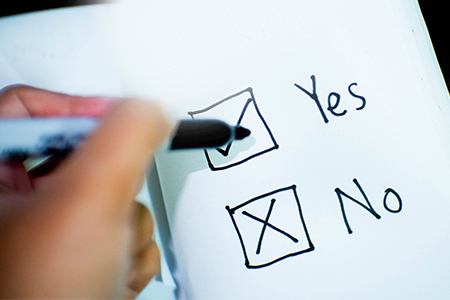 Q :
Dear Fr. Francis, How can I better understand “Let your ‘Yes’ be ‘Yes,’ and your ‘No’ be ‘No.’ (Mt 5:37)? I’m a bit confused as Jesus had tried to conceal his ID as the Messiah & sometimes asked those who received His healing not to spread the news publicly which seems to contradict this teaching to tell the truth. How should I apply it to my daily life? Should I not take Mt 5:37 literally and need to be flexible if saying the truth might hinder God’s work in certain circumstances? Thank you.
【 Question from 】 Canada 加拿大
Fr. Francis :

First of all, let’s try to understand why Jesus told certain people, but in fact not all, whom He healed to not tell other people.

He did so not to hide his power, since many times He openly healed whole crowds of people, or the healing of the blind man Bartimaeus outside of Jericho in front of a big throng of people. As well, He also performed great miracles like the two multiplications of food in front of thousands. He never told these people not to talk about it. And they simply could not be hidden anyway.

He told certain people not to tell others for two main reasons. First was for their own good, because He knew that these individuals had not yet believed in Him, but were still in the stage of merely wanting His miracles, or their own version of the Messiah as their own military king. We see this in John right after the multiplication of food. They wanted Him only to be their king. We also see this with those whom he explicitly told not to tell others. After they spread the word, instead of drawing more people to believe him, they came to ask for another sign.

The second reason is that He knew that the more people were drawn to His miracle instead of His message, it would accelerate the coming of His eventual arrest and passion. He needed time to instruct and form His disciples. He needed time to confront the Jews. We see that already because these individuals did not heed his request for silence, the authorities right away started persecuting Him, so much so that He could not stay in the cities but performed His ministries only in the countryside.

Therefore, this so-called “messianic secrecy” is not a ruse, a trickery, nor a denial of truth. It certainly is not the case that Jesus was asking people to lie. It is simply telling them to withhold from volunteering information for their own good.

When Jesus taught us to let our yes be yes and our no be no, I don’t think He was talking about spilling our guts about everything we know. Not all truths should be told all the time, to all the people. That would be insensitive and tiresome at the least, and ultimately uncharitable. What it means is that when we do speak, we should speak truthfully and without deceit. We also should not muddle ourselves with half truths or be two-faced, but be honest and straightforward in our beliefs.

So when it is not conducive to God’s Plan to speak certain things, let us be silent. But when we do speak, let it be truthful and clear. We have nothing to hide, and the truth will make us free.