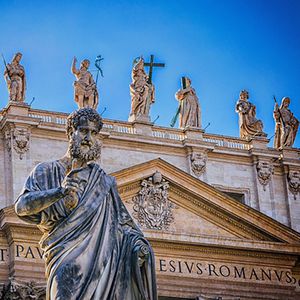 Q :
The disciples selected Matthias as a replacement of Judas. But then God picked Saul Himself later on. There is no mention of Matthias in the Bible except in first chapter of Acts. On the contrary, Paul's teaching in his letters has a huge influence in the infancy of the Church, and Church nowadays. Was Matthias not a perfect replacement in God's eyes?
【 Question from 】 Canada 加拿大
Fr. Francis :

If because St. Paul had more well-known writings and recorded travels to the Roman world made him better and more important, then by the same token, all the others apostles and disciples were superfluous and a waste.

This argument does not stand.

What did happen was that each of the apostles, with the exception of St. John, suffered martyrdom, and all of them travelled near and far and established many Christian foundations, this including Matthias.

That a good number of them we have little or no record of does not make them second-class. They merely had different gifts and contributions.

St. Paul’s particular gift was his field of evangelization happened to be the Romans, the most civilized part of the world then. He was a Roman citizen and had good education in Latin and Greek. That’s why he had that many writings, and that they could be preserved, and that he was noticed.

Just imagine: if Paul went to India, he would not have had the same easy recognition or with his writings so quickly spread and read. But wait, that was where Thomas went. Most Christians do not know Thomas’ tradition and acts in India, but talk to a Catholic in Kerala, and he is still well remembered there.

And Matthias’ story is quite unknown, but so is those of Bartholomew, Matthew, Jude, etc.

We are all parts of the same body — the Body of Christ. Some parts are more obvious and others more obscured. Some saints are better known and others are hidden and unknown. But I was told many times, and I believe it firmly, it is the ardent sacrifices of the hidden saints that fuel the Church at its heart, so that the more visible apostles, teachers, prophets, and leaders can function. One cannot be without the other.

I think we will be in for a shock when we get to heaven, that we are going to discover that it is not the stories of the well-known saints that are the best ones, but rather the immense number of lesser known saints on earth that have filled the most glorious pages of God’s untold story.