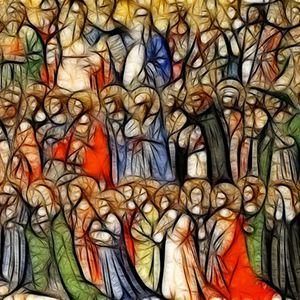 Q :
Where in the Bible does it tell us it’s ok to pray to dead saints or the dead mother of Jesus? I only see where we can pray to God through Jesus and nobody else.
【 Question from 】 Other, US
Fr. Francis :

First of all, the holy people who passed on are not dead to God. Their bodies lie dead, but their souls are alive before God. We know this because at least three times Jesus either spoke of it or alluded to it:

1) at His debate with the Sadducees concerning the truth of the resurrection of the dead, Jesus said that God is “the God of Abraham, , and the God of Isaac, and the God of Jacob’… He is not God of the dead, but of the living.” (Matt 22:32) Jesus was clearly stating that Abraham, Isaac and Jacob were alive to God.
2) At Jesus’ Transfiguration, all gospel accounts testify that Moses and Elijah spoke with Jesus. Obviously they were not dead, not even frozen, but very much alive.
3) In the parable of the rich man and Lazarus, while the rich man was said to be isolated in a place, supposedly Hades, where he could not come out, Abraham and Lazarus were said to be in a very different place, where the possibility of going to warn the rich man’s brothers was never disputed. Here we can more clearly deduced that the rich man is clearly “dead” as in being locked down, but the saints — Abraham and Lazarus, were alive, as not being locked down.

Second, although many Catholics use the phrase “praying to the saints”, the proper meaning is never praying to them as gods, but rather either asking them to pray for us, or to pray with us. Catholic doctrine is very clear that we only pray to the Triune God alone. If anyone is praying to a saint in heaven as worship, that is a heresy and is not Catholic. Are there Catholics who don’t understand this and idolize the saints? Of course, but it is with every belief systems. The malpractice of some does not mean the official teaching is wrong.

So why do we ask saints to pray for us?

Simply because they are our friends and family. Just as we ask people alive here below to pray for and with us, because Jesus loves us to pray together, so much more we want to continue with those alive in heaven, now already seeing God face to face, to pray for us because they know God’s Will so much more clearly than we can. And the more we gather with them around God, the more we long for seeking holiness like they did. And Jesus loves this because in John 17 he kept asking the Father to give us the grace that we may all be one. We want to be one in our desire to love God, with our family here below, as well as our family we will forever be with up above. Yes, we love Jesus and we worship Him alone. But because of that we also love everything and everyone He loves, and that definitely includes the saints who delight God so much by already proving their fidelity to Him.

And going to the saints for prayer is safe, just as gathering with others here below for prayer is safe. In fact, we learn to love and forgive so much faster when we have to rub shoulders with our family below, so it is we learn to persevere and trust God more knowing the examples of those who already triumphed.

And why does the bible not talk about this?

There are tons of stuff that the bible does not talk about explicitly, yet Catholics and Protestants alike all embrace. THe doctrine of the Trinity, for example, was not mentioned in the bible explicitly. Yet as soon as a Christian denomination decides to abolish it, it is no longer Christian.

The idea that only the bible is acceptable authority, Martin Luther called “sola scriptura”, was also not in the bible. So “sola scriptura” is from outside of the bible, not trustworthy? In fact, the only time when scripture and tradition are mentioned together in the New Testament,was when St. Paul wrote “ So then, brethren, stand firm and hold to the traditions which you were taught by us, either by word of mouth or by letter.” (2 Thes 2:15) Clearly before there was the New Testament, there were only the traditions of the apostles, some got written down and made it to the New Testament, some passed by words and made into prayers and liturgies and customs, and some written down through the continuous inspiration and guarantee of the Holy Spirit down the centuries as Church documents.

The tradition of praying through the saints are particularly found in the second and third kind of this trustworthy “tradition” that St. Paul talked about, particularly, the structure of the Holy Mass with specific mention to the intercession of the saints can be found in such documents as early as the second century as something always practiced by the Church. So it seems that if “sola scriptura” is to be believed, then traditions outside of the bible that was authentically practised by the Church should also be believed, and a narrow view of only trusting the bible should be abolished, as it is contradictory to St. Paul’s clear teaching.