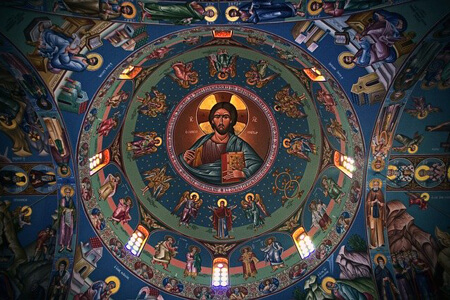 Q :
We know Blessed Virgin Mary is the Immaculate Conception because Jesus has saved her first. From this, we see the salvation of Jesus transcends time. Then, may I know why Jesus didn’t also first saved the Faithful in the Old Testament? Instead, He let them stay in Limbo for centuries?
【 Question from 】 Hong Kong 香港
Fr. Francis :

There are two sides to this answer.

First of all, the question is not a question of doubt; it should be a question of trust. We know that God is a loving God and He does not want His loved ones suffer unnecessarily. So, whatever the state of being the holy souls before Jesus was in, there must be some way they were provided for that reflects the goodness of God. We have a glimpse of that in Jesus’ parable of the rich man and Lazarus. Lazarus the beggar, who suffered grievously during his lifetime, was said to be comforted in the “bosom of Father Abraham”. Though some would say that this is heaven, many scholars tend to differ, since there is no mention of glory and angels, as every other mention of heaven has them mentioned. So, we need to begin with trusting the Lord’s goodness that He would not allow things amiss for His loved ones, instead of an attitude of doubt, which can blind us to His Goodness just because there is no mention of one fact or things seem illogical to us.

So, if you allow me to philosophize here, for the spiritual realm, time is experienced as distinct points only when there are changes. So consider the souls of the dead. We can say that after their death, their souls either experienced changes or they didn’t. If they didn’t, that would be because they were already purified, lacking only the mercy of God to be revealed on the Cross when Jesus came. But since they had no need for change, time did not move for them, and so as far as they are concerned, there has been no delay.

And if their souls experienced change, then trusting in the merciful plan of God, that change must have been directed toward further purification and preparation of these souls for the coming glory of heaven, to be offered to them when Christ triumphed. So, though there would be changes and so the experience of waiting in time, that waiting would be immensely profitable and necessary for meeting Christ.

So, if you may, except for the necessary time for purification, righteous souls of the Old Testament would have experienced a kind of “telescopic” time, where for some of them, the moment between their death and the opening of heaven on the Easter Day, may just have been for them as a mere blink of the eye.

As to the idea of time for the dead being non-chronological, we know this from the passage of the Transfiguration, where Jesus meets Moses and Elijah glorified. Jesus had not conquered death yet, so chronologically they should not yet be in glory, yet here they are shown in glory. One may argue Jesus was meeting the future Moses and Elijah. But I would say rather that for God, chronological time after death is an absurdity. All souls just live in the eternal now before God.