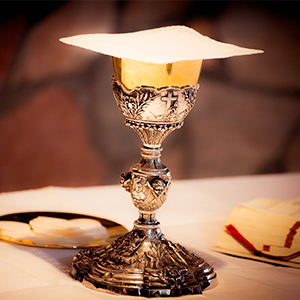 Q :
Why do Catholics believe that the bread and wine offered at mass becomes the body and blood of Christ?
【 Question from 】 Canada 加拿大
Fr. Francis :

The simplest answer to this question is that because Jesus made it very clear at the Last Supper that “This is My Body” and “This is the Chalice of My Blood”.

We know that he meant it literally here, and not merely symbolically for the following reasons:

1. In John 6, Jesus repeatedly told his followers that they must eat His flesh and drink His blood. The people found it difficult to believe, since it would mean cannibalism. But instead of backing off, he used a more graphic word that means gnawing and chewing instead of merely consuming. The Jews understood that he was serious and declared this teaching is too hard and left. Yet Jesus did not call them back and explain that he merely meant it spiritually. Instead He turned to His apostles and asked if they wanted to leave too. This clearly and strongly points out that we need to actually eat His Body and drink His Blood to have life. This also means that Jesus must therefore would have to provide the means by which we can do that. And that we know He indeed has provided us at the Last Supper when He inaugurated the Sacrament of the Eucharist.

2. It is definitely possible for God. Jesus is God. God can make all things out of nothing. Jesus certainly can make bread and wine into His Body and Blood.

3. Jesus gave His priests the power to do the same. Some may argue that only the bread and wine at the Last Supper changed into Jesus’ Body and Blood, but all subsequent Masses were merely recalling Jesus’ sacrifice. But this cannot be. When at the Last Supper, which was also the Jewish Passover Supper, Jesus said, “Do this in remembrance of Me,” He could not possibly have meant our modern sense of “remembering” as recalling something in the past, but rather what the Jews would have meant when they say “remembrance” at the Passover Supper. For the Jews, especially when recounting the Passover event, the remembrance is not pointing to the past, but rather an act of identifying with their ancestors in the past, and entering into the same saving sacrifice of the original Passover. Therefore, when Jesus commanded His apostles to do the same actions in remembrance of Him, He was commanding them to enter into this same mystery. The only way this identification can be real is that He has commanded and empowered them to also transform the bread and wine into His Body and Blood, by using the same words of consecration He has given them.

4. And this is certainly possible, since these apostles, after receiving the Holy Spirit, had also proven to be able to do the same miracles as Jesus did — casting out of demons, healing of the sick, raising of the dead. And we know the authority of being able to impart the Holy Spirit onto their successors has also been given to them, as many times proven in the Acts of the Apostles.

5. And indeed, from the Church’s earliest documents, starting with the New Testament, but more explicitly in the writings of the early Church dated back as early as the Didache in the first century, the teaching of the Church clearly states that the bread and wine, as taught by Jesus, is transformed into His Body and Blood at every Mass when the priest pronounces the word of Jesus at the Last Supper.