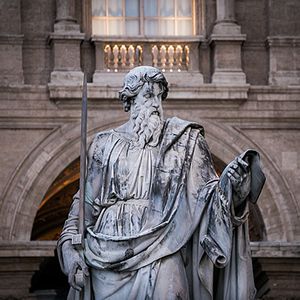 Q :
Jesus preached mostly to Jews in His 3 years of ministry (except the encounter of the woman of Canaanite). He downplayed the Gentiles (Matthew 5:47, 6:7) and even instructed the Apostles to avoid them (Matthew 10:5). In the first few chapters of Acts, Peter also focused his ministry on Jews. But then God made a sharp turn converting Saul/Paul and sent him to Gentiles preaching the Gospel. Was the plan changed? Why?
【 Question from 】 Canada 加拿大
Fr. Francis :

It is true that Jesus did not minister extensively to the Gentiles. But He actually did minister to more than just the Canaanite woman you mentioned, since the second multiplication of the loaves was actually performed on the east side of the Sea of Galilee, which was predominantly occupied by the Gentiles, and Jesus’ visit to the area of Decapolis, which is also Gentile territory, as well as the famous centurion whose slave Jesus’ cured after saying “Lord, I’m not worthy that You should come under my roof, but only speak the word and my slave will be healed.”

It is also true that the early chapters of Acts mainly preoccupied the conversion of Jews and Samaritans. However, the first to convert the Gentiles were not Paul or Barnabas, but Peter at his visit to the house of Cornelius in Caesarea Maritima (Acts 10) and the diaspora disciples after the martyrdom of St. Stephen (Acts 11:19ff). And then there was also the conversion of the Ethiopian eunuch earlier by Philip the deacon.

But it is not until Acts 11 onward, that the spreading of the Gospel to the Gentiles by Paul and Barnabas became the dominant focus of the New Testament.

Is this a change of plan? No, but it is a new phase of God’s plan already mentioned in the Old Testament.

It goes back to the call of Abraham. When Abraham was called, one of the promises of God was that “through you, many nations will be blessed in you.” (Gen 18:18, 22:18, 26:4) This was understood by the Jews as this: that God will make the Jews a great nation, and other nations will come to see their blessings and they will eventually share in their salvation by all becoming Jews.

This, however, was not what God said in the Old Testament. He simply promised that the Jews will be saved, and somehow through them, the other nations will also be saved. But there is an order: Jews first, then others.

This point should be familiar if you are familiar with Paul’s preaching. Every place Paul went to preach, he always went to the Jews first. It was only after he had been rejected by the Jews, then he would go to the Gentiles.

What God’s plan for the Gentiles is: the Jews must be first, since He has chosen them first. But once the time is ripe, in this case, the definitive rejection of Jesus, then was time to initiate the last phase of His Plan: to bring the Gospel to the world.

The question that remains is: why would God not go to the nations at the beginning? Because He is a God of relationship. Mankind needs time to know God and His ways. So God calls us one at a time, drawing us as a family into making a covenant with Him. So He called one man – Abraham, one tribe – his descendants the Israelites, one nation– Israel, one lineage – to give birth to Jesus. And until Jesus’ Gospel was received and understood at Pentecost, then the small remnant of Israel, the disciples of Christ, were ready to be sent out beyond the confines of the Jewish lineage, and to fulfill the promise God made to Abraham.

In this light, you would also be able to appreciate Jesus’ words better when he said “You will do greater things [than He].”, and “You will testify before governors”, and of course “Go out to all the nations, teaching them what you learned, baptizing them in the name of the Father, and of the Son, and of the Holy Spirit.” It was all within God’s Plan.