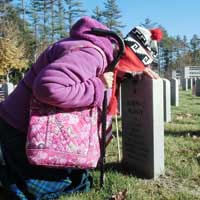 Q :
After struggling with bone cancer for over 10 years, God brought my elder sister back home last Saturday. Before she passed, she expressed that she preferred to have a burial at sea(海葬) . What is the teaching and attitude of the Catholic Church towards this issue?
【 Question from 】 Vancouver, Canada
Fr. Francis :

In the Order of Christian Funeral (OCF), the instructions regarding burial at sea and cremation are mentioned together. Here I first quote some of the relevant paragraphs:

“The Church’s belief in the sacredness of the human body and the resurrection of the dead has traditionally found expression in the care taken to prepare the bodies of the deceased for burial.” (OCF 411)

“This is the body once washed in baptism, anointed with the oil of salvation, and fed with the bread of life. This is the body whose hands clothed the poor and embraced the sorrowing. Indeed, the human body is so inextricably associated with the human person that it is hard to think of a human person apart from his or her body. Thus, the Church’s reverence and care for the body grows out of a reverence and concern for the person whom the Church now commends to the care of God.” (OCF 412)

Thus, while “cremation is now permitted, it does not enjoy the same value as burial of the body…The Church clearly prefers and urges that the body of the deceased be present for the funeral rites, since the presence of the human body better expresses the values which the Church affirms in its rites.” (OCF 413) However, “when extraordinary circumstances make the cremation of a body the only feasible choice, pastoral sensitivity must be exercised by all who minister to the family of the deceased.” (OCF 414)

Any catechesis on the subject of cremation should emphasize that “the cremated remains of a body should be treated with the same respect given to the corporeal remains of a human body. This includes the use of a worthy vessel to contain the ashes, the manner in which they are carried, the care and attention to appropriate placement and transport, and the final disposition.” (OCF 416)

Here I add my own observations:

It is clear that OCF teaches that body burial remains the preferred and more dignified way of respecting the dead. Sea burial typically is reserved for death at sea and when it is not feasible for the body to be kept onboard until at port. The ritual does allow for the cremated remains or the body to be buried at sea, but preferably only when body burial is not feasible. For example, when land is not available or too costly, or if it would cause serious conflict in the family, etc.

Notice that OCF teaches against the practice of keeping the cremated remains at home. This is not the same as the ancient Chinese practice of keeping all the remains in the memorial hall of the clan’s village, which essentially serves as a mausoleum since it is a somewhat permanent place of rest. However, our homes today are not permanent residence. The care and respect we pay to our loved ones are often not carried on to the next generations, and they would not want to have the responsibility of looking after the ashes. It is indeed better for the family members who know and love the person to properly put the remains to a permanent place of rest, than to leave it to those who do not know the person to be responsible for it.

Lastly, every baptized person is baptized to be a saint. As a result, the person’s remains should be treated with the reverence of a saint’s relics. They are not simply a body that is no more, but has through a lifetime of sanctification been transformed, in part or in whole, into an efficacious channel of God’s grace, which often remains to be efficacious even after death. This is the reason why the relics of the known saints have the power to heal and exorcize. If we believe and hope our loved ones to be passing onto heaven, we must also believe that their remains may possess such powers, and thus must be treated with the utmost dignity and reverence.