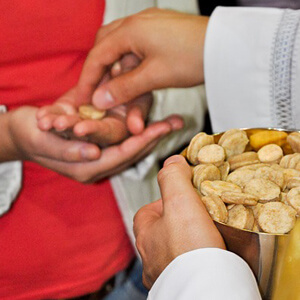 Q :
My son is allergic to wheat and is going to have his first communion in coming year. Is there a gluten free option for the Eucharist?
【 Question from 】 Canada 加拿大
Fr. Francis :

In the religious supplies stores today, you will find that besides the normal hosts, there are also “low gluten” and “gluten free” hosts. The low gluten hosts are acceptable for Catholic Mass, but the gluten free hosts are not.

The reason is that for the consecration to be valid, the host must be made of wheat. Gluten free hosts have no wheat in it at all and so cannot be consecrated.

So, if the nature and seriousness of the allergy does permit some gluten to be consumed once a week, your son can use the low gluten hosts. He will need to purchase his own hosts, put it in his own pyx (a special container for hosts), give it to the priest celebrant before mass and inform him about the special need. Some churches already have low gluten hosts available, but it is always safe to prepare his own since he may go to mass at different locations from time to time.

However, if the allergy is severe or if he has celiac disease, he should not use the low gluten hosts. Instead, he can choose to receive the precious blood from the chalice. For parishes that do not regularly give Communion under both species, he will need to inform the priest celebrant before mass so that it can be arranged.

If a person is both celiac or severely allergic to gluten, and he is also alcoholic or allergic to wine, he will have to find another solution with his pastor.