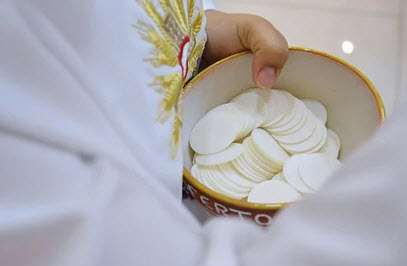 Q :
I was recently told by a Catholic friend that we shouldn’t receive holy communion by hand, and should only receive directly on our tongue. Reasons being only priests’ hands are consecrated, if we receive by hand, traces of small particles of Jesus’ body will be on our hands. Moreover, the likelihood of dropping the bread is higher if we receive it by hands. Could you share what is the Catholic history and teaching on this? Are there certain groups of Catholics who were taught differently?
【 Question from 】 Canada 加拿大
Fr. Francis :

The history of the practice of how Communion is administered to the faithful has undergone a number of changes over the years.

From the description in the scriptures, it is evident that the early Church received Communion on their hands.

Some time in the 4th century on, various dioceses began to require reception on the tongue. This corresponded with the legalization of Christianity and the subsequent influx of unprecedent number of new believers. It is very likely that with the threat of persecution removed, the quality of the faithful also experienced a general decline, and the Church realized a need to address a possible rise in irreverence toward the Eucharist during Communion.

However, even during this time period, we can still find Church Fathers instructed the faithful to make their hands into a throne when receiving the Communion, meaning reception on the hand was still regular in some parts.

It was not until the first major Eucharistic controversy in the eighth century (Berengarian heresy) that the Church made reception on the tongue universal. However, at that time, reacting to the heresy of seeing the Eucharist as a mere symbol, the Church went over to the other extreme, to see the Eucharist in an overly literally physical way. The result was that gradually Communion was removed from the faithful except for very special occasions, and only after confession on the same day. Even the religious was allowed Communion only 3 or 4 times a year.

By the Middle Ages, the explanation that any unconsecrated person touching the Eucharistic host, or any sacred vessels, was a sacrilegious act became formal. Communion on the hand became an act of grave matter.

At the Council of Trent, only reception on the tongue was allowed.

Here is my take of the matter.

It is obvious that reception on the hand has once been valid, and in fact, was the only mode of reception in the early Church. It is therefore a matter of discipline and not a matter of doctrine, which means that it could change over time.

Consequently, although it was once condemned by the Church, it can also be reinstated.

Personally, I disagree with how it was reintroduced back into the Church. The method was simply wrong. However, using the wrong method does not automatically mean the end is wrong too. Yes, reception on the hand may create more room for abuse, but that’s on the person’s intention, not on the act itself. Insisting on condemning an action that was clearly practised in the earliest times is also wrong. And to say that the faithful are not fit to touch the host would be a broad condemnation on all the faithful in the first eight centuries of the Church, including many holy saints who instructed the faithful to do so reverently. That just doesn’t stand.