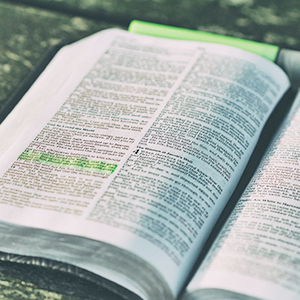 Q :
I would like to invite my Protestant friend to explore our Catholic faith, but one of his hangups is that Catholic do not believe in Sola scriptura. Can you please explain Catholic stands on Sola scriptura? Is this explained in the Bible?
【 Question from 】 Canada 加拿大
Fr. Francis :

I will try to summarize the relevant parts in English below:

The idea of sola scriptura, or Scripture alone, was introduced by Martin Luther in the 16th century. Luther originally was an Augustinian monk who, seeing the corruption in the Church, requested for a reform. But having been ignored by the Church, and encouraged by many princes who wanted to use this opportunity to break away from the control of the Holy Roman Empire and the political influence of the Pope, he decided to leave the Church and started his own. Because of his disappointment in the Church authority, he decided that he could no longer trust mere human teachings that are not recorded in the Bible, and so established the rule of sola scriptura. As a result, any Christian practice that cannot be directly found in the Bible was removed by him and other subsequent Protestant denominations, including the sacraments of baptism, Holy Orders, confession, and Holy Eucharist, the Holy Mass, devotion to Mary and the saints, as well as the Church’s authority to sanctify, teach and govern, etc.

Unfortunately, Luther at the time did not realize that the majority of these so-called extra-biblical teachings were actually not man-made, but could be traced back to the apostles, which means that they were taught by Jesus Himself. Meanwhile, the authority of the Scriptures is also founded on the fact that they were taught and passed on by the apostles. Hence, the real foundation is not merely the Bible, but on Jesus, transmitted through the apostles; some of it written down as Bible, some in liturgies, some as living tradition, and some in pictures and artworks.

Some may argue that since these other forms are less certain, it may be best that we don’t put our trust in them. But sola scriptura still has other problems.

Firstly, the people who uphold sola scriptura are not keeping the rule. They still hold on to certain things that are not clearly taught in the Bible. For example, the belief of God as Trinity: Jesus never mentioned this clearly in the Bible, but Protestants and Catholics alike held it as the core belief of our faith.

And there are things that are clearly and explicitly stated but they refuse to accept, like the truth that the Holy Eucharist is really and substantially the Body of Christ. In John 6, Jesus repeatedly insisted that we must eat His Flesh and drink His Blood, to the point that it even caused many of His disciples to abandon Him; and at the Last Supper, He declared “This is My Body… This is My Blood… Do this to remember Me.” If this is not clear, I don’t think there is anything worth believing in the Bible!

(Some may argue that Jesus only meant this symbolically. But no, the Jews understood Him clearly, and it was for that reason that they decided to stop following Him. And when Jesus saw that, He not only did not say He only meant it symbolically, but increase the force of his language from eating His Flesh to chewing or gnawing His flesh. And the word “remember” in the Last Supper was never meant to be looking back to the past. Jews eating the Passover meal “remembers” not by past tense, but by present tense; they always believe they are entering into the same salvation as the first Passover. Jesus knew that and He meant it exactly the same way.)

Lastly, is “sola scriptura” mentioned in the Bible? The interesting thing is no. But Paul did mention in 2 Thessalonians 2:15 that “You must hold fast to your tradition.”

So, sola scriptura is not scriptural. To live the rule, you must break the rule.