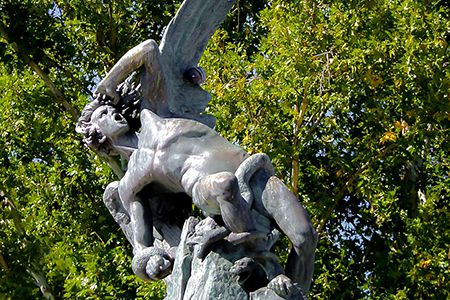 Q :
Why St. Paul said “…that through death he might destroy him who has the power of death, that is, the devil..” I thought only God has power over death and life. The devil does not and cannot rule or govern human lives?
【 Question from 】 Canada 加拿大
Fr. Francis :

The quote you have is from Hebrews 2:14, where it says: , he himself likewise partook of the same nature, that through death he might destroy him who has the power of death, that is, the devil…

There are two ways to understand this. Before the death and resurrection of Christ, all who died, righteous or otherwise, did not have access to heaven. They were therefore locked up by the devil until Christ came to take down the gates of hell. It is therefore accurate to say that the devil had the power of death before that point in the sense that he was given power to lock them up.

The second sense is that, God did not create death. Death is the work of the devil, along with decay and corruption. The devil therefore has the power of death as a weapon of destruction. However, he can only do so when God permits it. Here in this verse, it is clear that this power of death that the devil wields used to be thought to deal out the last word to our life. But after Christ’s death, which put death itself to death by His rising to life, puts an end to the power of death. It is in this case that God demonstrated that He is the true Lord both of life and of death, not in the sense as the devil in wielding death as a weapon, but in conquering it and robbing it of its power.